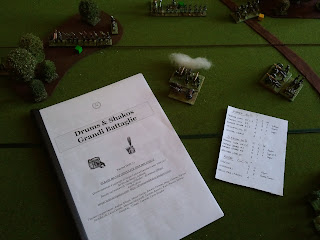 Thanks to Diego and Massimo from Rome, last sunday was an intense playtest day for D&S Large Battles. I prepared a small size battle, with a Division for each side - French Vs. Austrian. As usual, they arrived around 10 AM, we started playing and Andrea joined us soon after.
We had a (long) break for lunch - just an enormous greek salad, as the temperature was around 35° C - then completed the playtest game. Before leaving, I briefly explained Steel Juggernauts to them, but that was clearly not their cup of tea..... :) 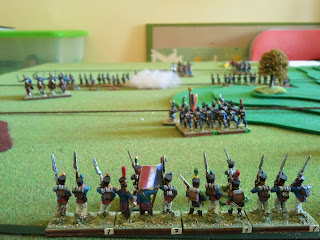 French infantry 7th Reg. de Ligne advances towards the enemy in line, while 3rd Lègere tries to go up the hill to avoid the artillery fire. Infantry Battalions are 4 bases and all have a Quality and Combat values (as in all Song games). 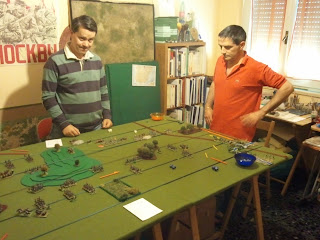 Diego and me during the final stages of the battle, which raged mainly on the French right. Massimo took all the pictures (I was too busy thinking) and I thank him for that.

The test results are OK: the game flows very well, the QRS is almost unnecessary (after 1-2 fights players manage all modifiers without looking at the tables), just 1 marker on the table (Disorder level) and there is a quick resolution of contacts, even if divided into Approach and Contact.
No Morale test, no casualty removal, no set play Sequence.

Diego, Andrea and Massimo helped me in fine tuning the Victory Conditions, that I wanted to depend on two factors: possession of the battlefield and losses. I think we reached a balanced solution: when you reach the Breakpoint of your Division, you have lost. What brings you down to the Breakpoint are losses, but also enemy units within your half of the table.
A fruitful day :)
Posted by Sergio at 9:09 AM