A great day of gaming yesterday in my living room, for the occasion transformed into a game room to accomodate a 300x180 cm table. We played a fictional scenario (French vs. Russian - 1812) that I designed to test some rules to play DBLS in multiplayer. Diego and Federico came from Rome; Marco, Stefano and Simone from Arezzo, Filippo from Florence and Narciso from Canino (even if he came quite late and could not take part actively in the battle). Andrea and Massimo (who were playing another game in the *original* gaming room) acted ad judges for the dice rolls of both the Commanders in Chief.
On the Russian side, Filippo was the Corps Commander and the 3 Division Leaders were Stefano, Simone and Marco. On the French side, I was the Corps Commander and took the 1st division (due to the absence of Narciso) and Diego and Federico commanded the 2nd and 3rd divisions.
The preparation of the table, Armies and game aids took more than a day as I wanted to identify all units with labels (below). 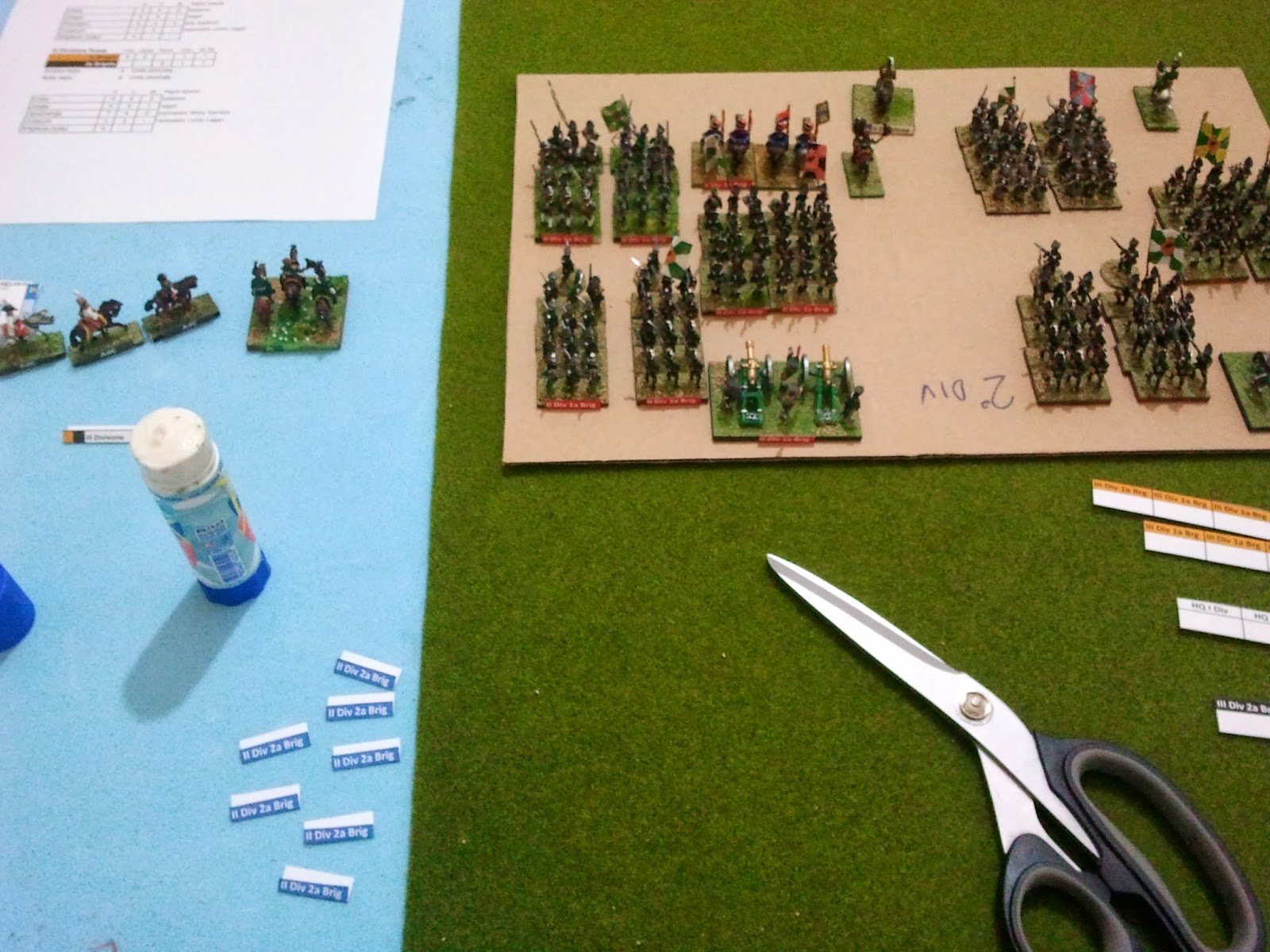 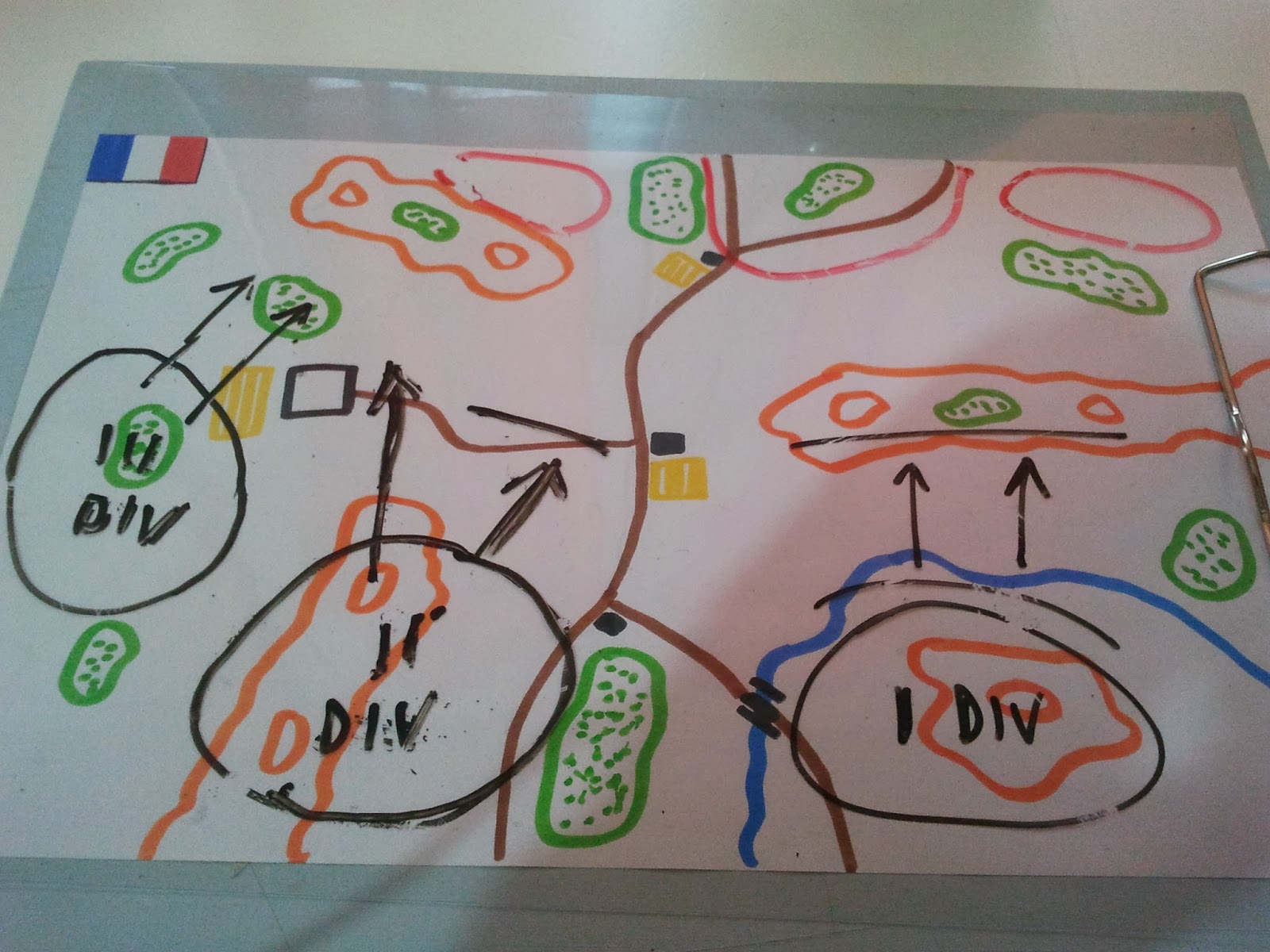 My battle plan before the battle - after watching the deployment - is in the above picture: while I (I Division) tried to take the hill in front of me (hills are orange), Diego had to split his II division: one brigade had to advance to the centre of the battlefield, while the second had to support the main attack by Federico's III division on our left. The intent was to crush the Russian division on their right, and roll the Russian front from the west, while we kept the other two Russian divisions pinned in the center and right of our deployment. Almost all my calculation went wrong - as we'll see  - and we suffered a bad defeat in the end. 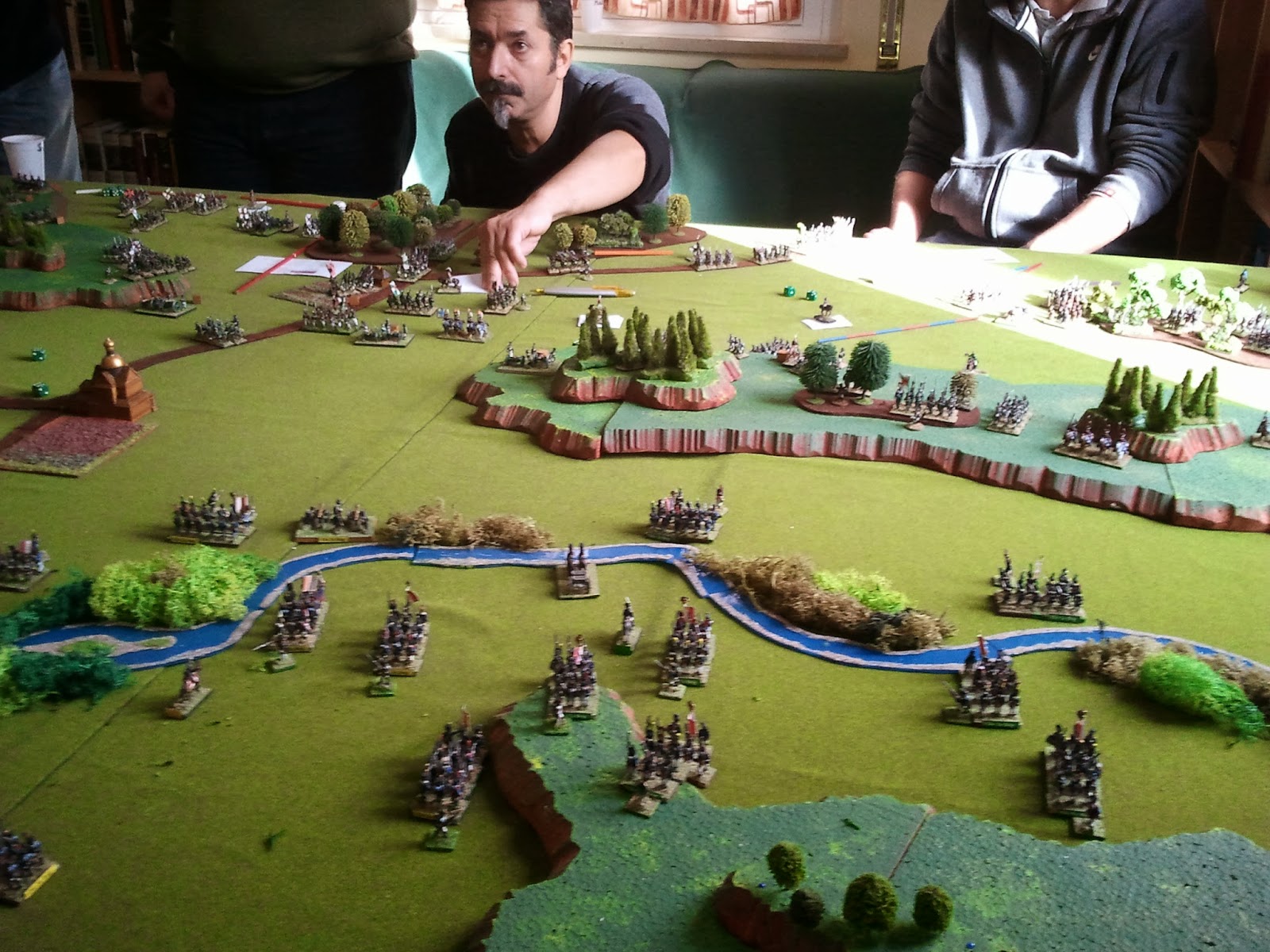 The opening moves of my Division: my columns try to reach the hill, but the Russian III Division commander (Simone) is quicker and reaches the crest with a couple of battalions and his Cossacks. Marco (top center) Commander of the Russian II Division - is moving his troops. 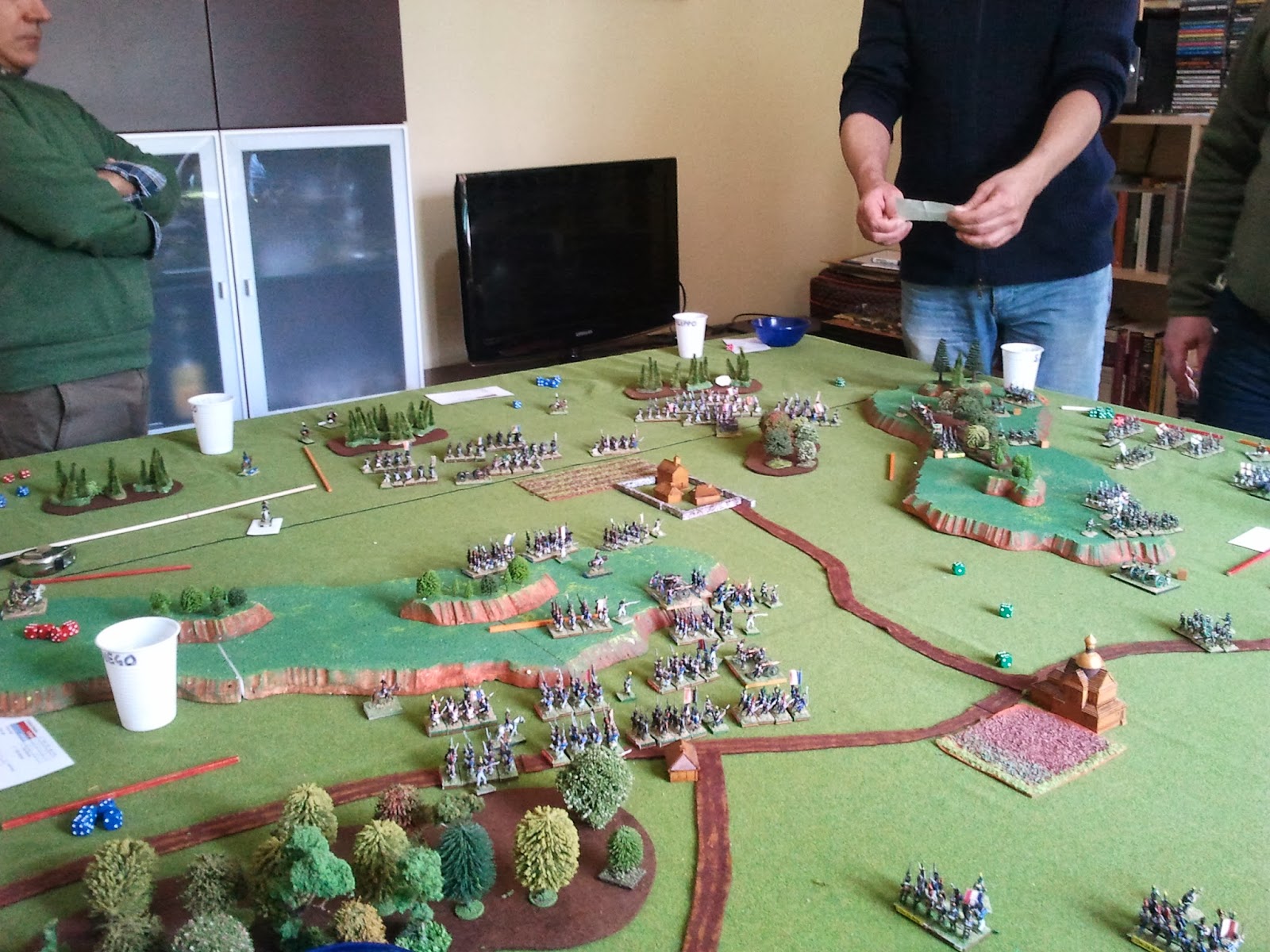 The other side of the table, with Federico (left) watching his III French division fast moving towards the enemy, and Stefano (Russian Commander of the I Division) reading and order just received from his CinC (Filippo). The plastic glasses you see on the table were the containers of the Command dice that each turn the players received from the CinC according to the distance from the Corps Commander. 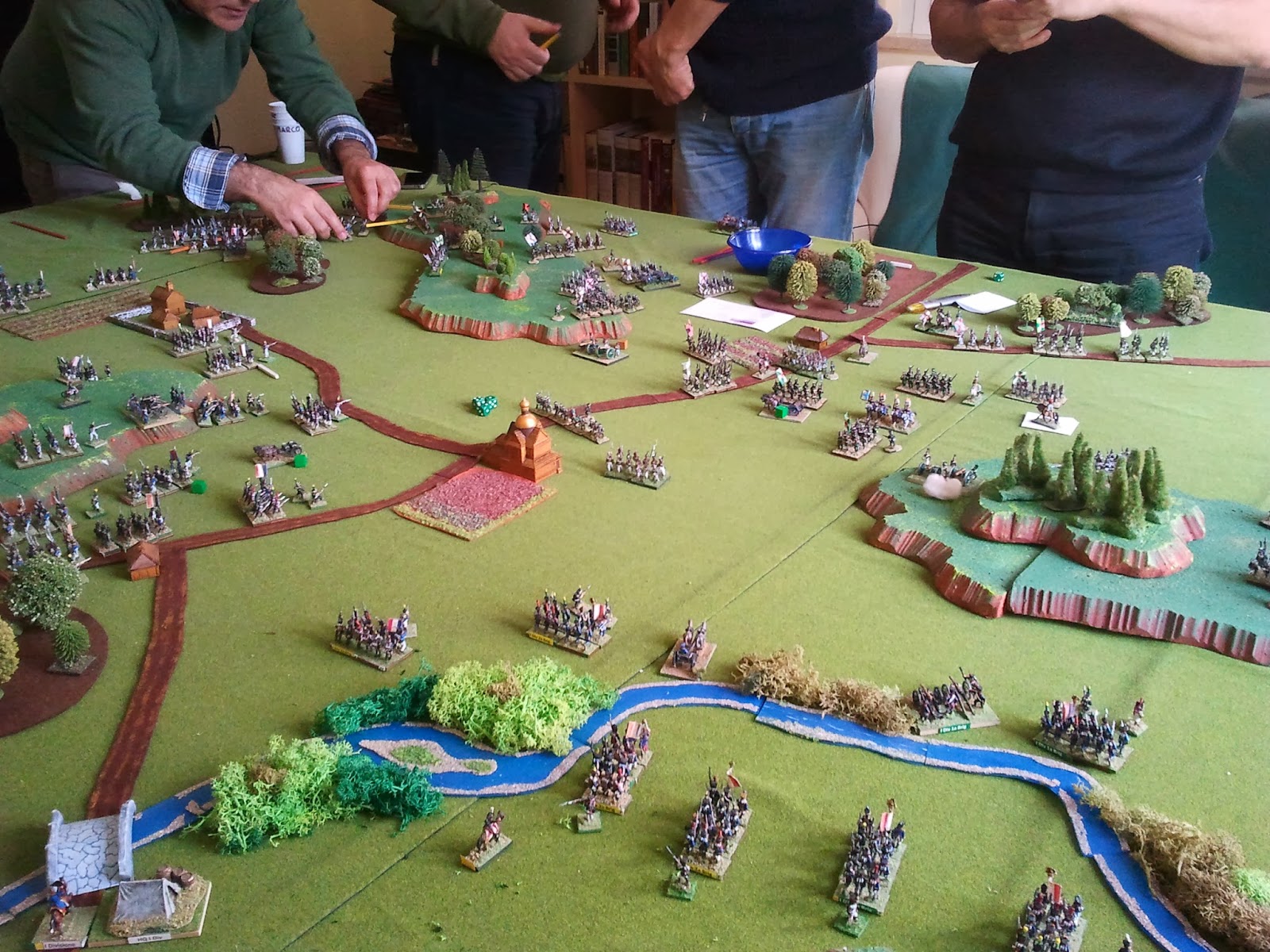 Federico's advance continues, and he's now ready to attack the hill. My advance - on the contrary - is stalled. 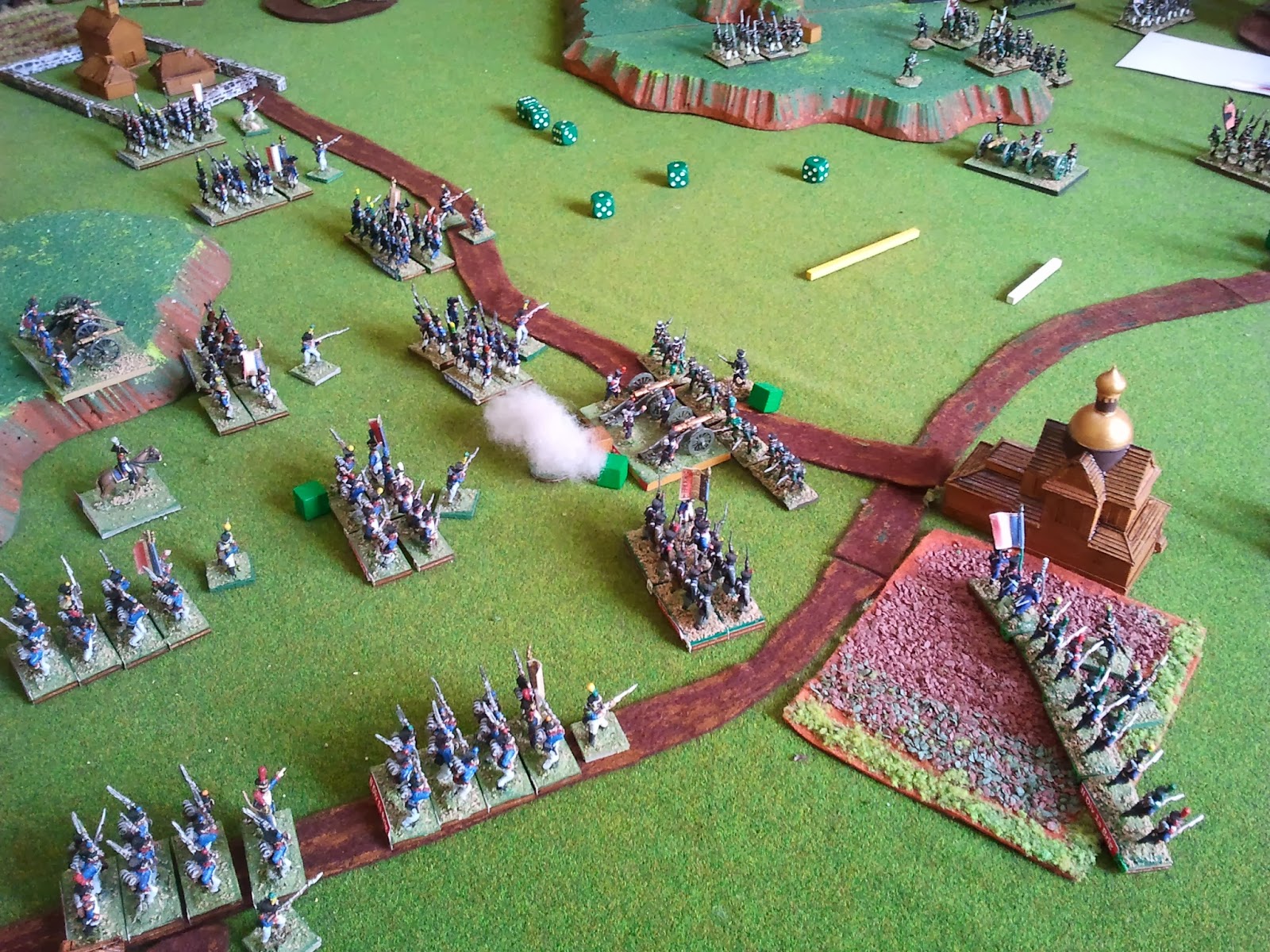 In the centre, Diego's French II Division is engaged by an unsupported attack of a Jaeger battalion, near the St. Nikolaj church. 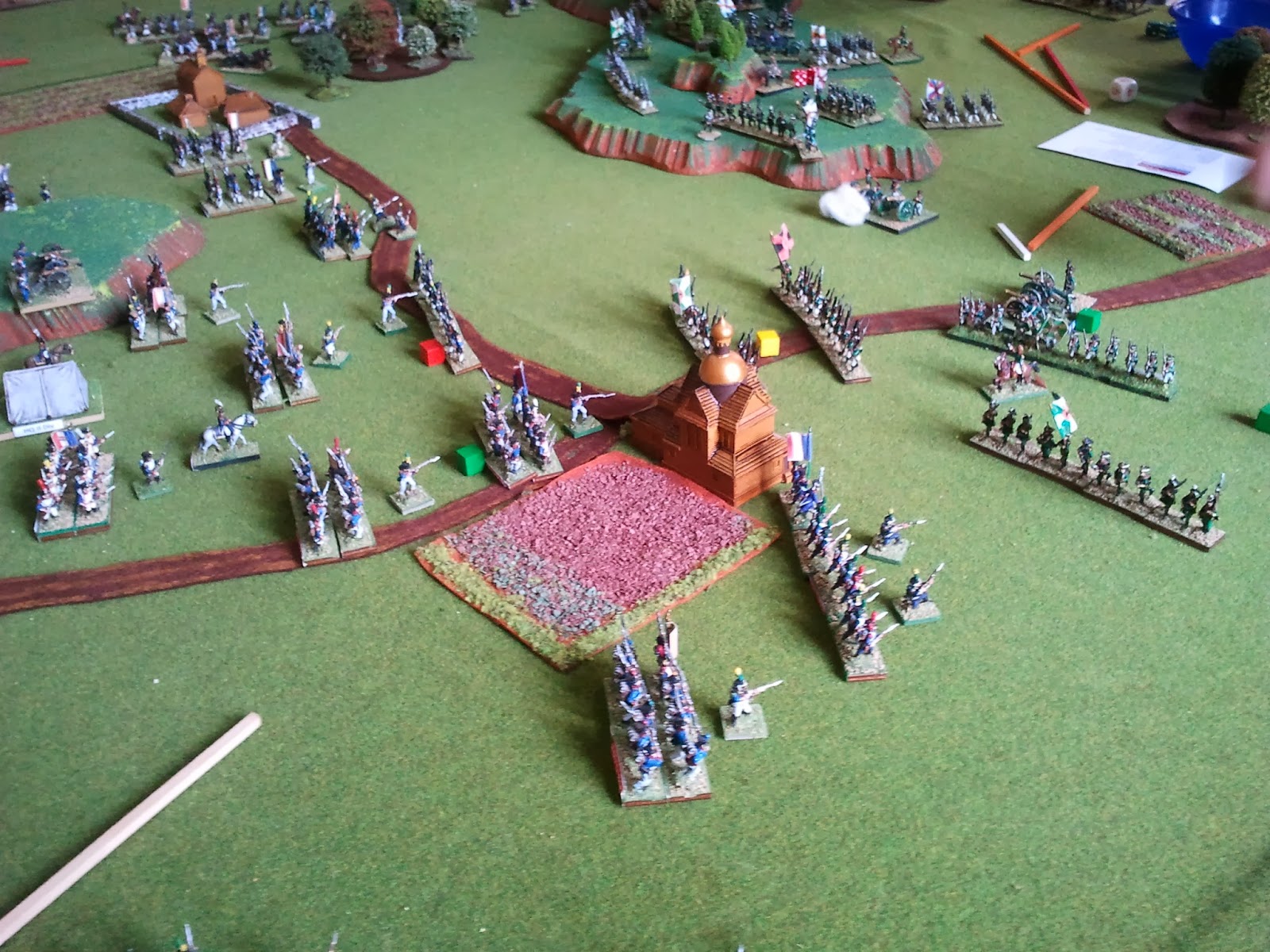 The attack is successful and a battery is destroyed, but the Jaeger battalion is also routed by Diego's counterattack. 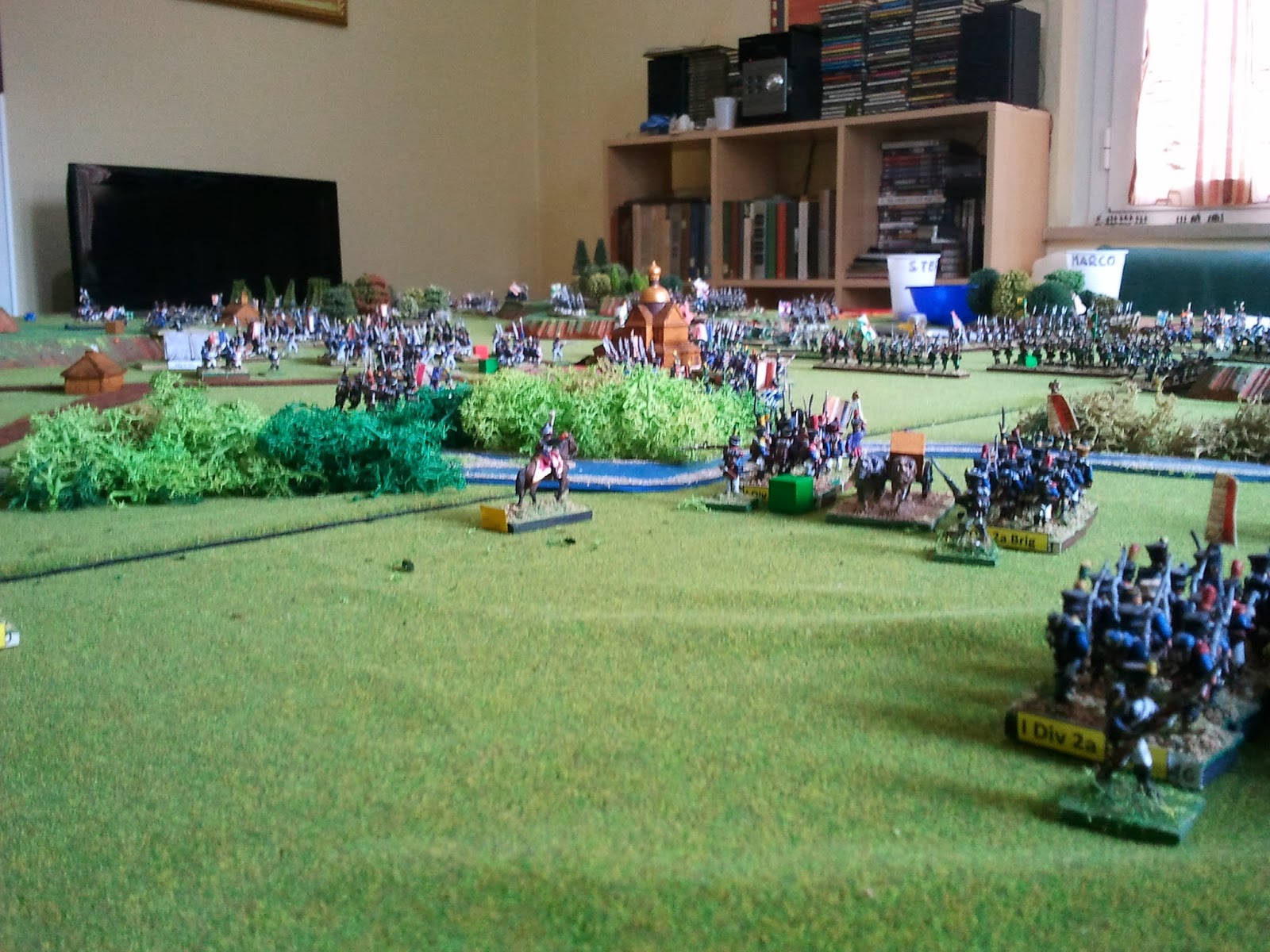 A view of the battlefield from a lower position (I love this kind of pics). 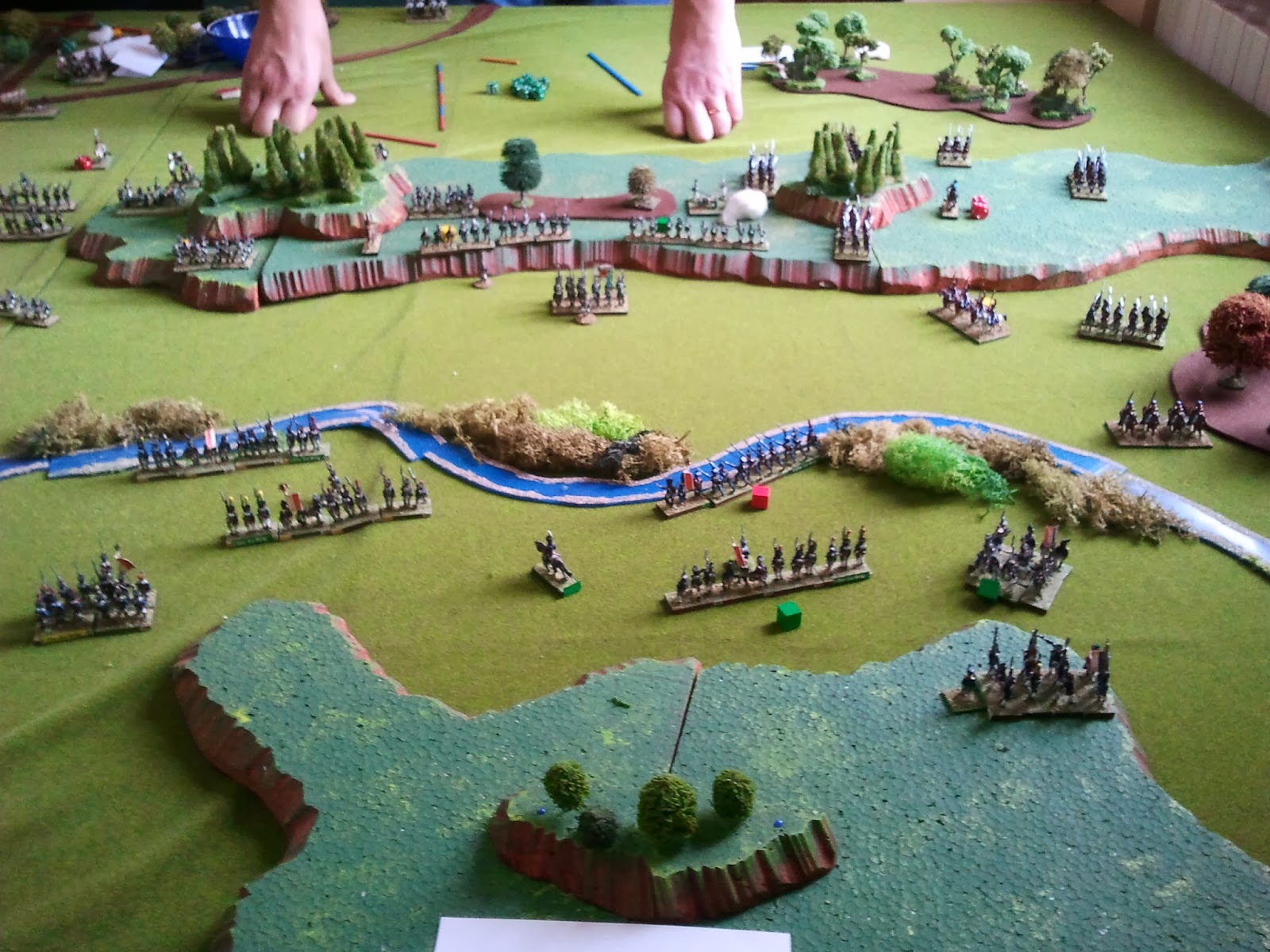 The situation on our right at about mid-game (before pizza came for lunch :). My opponent Simone controls the hill, and he's ready to launch his attack. I took position behind the stream (lichens indicates where fording was not possible). 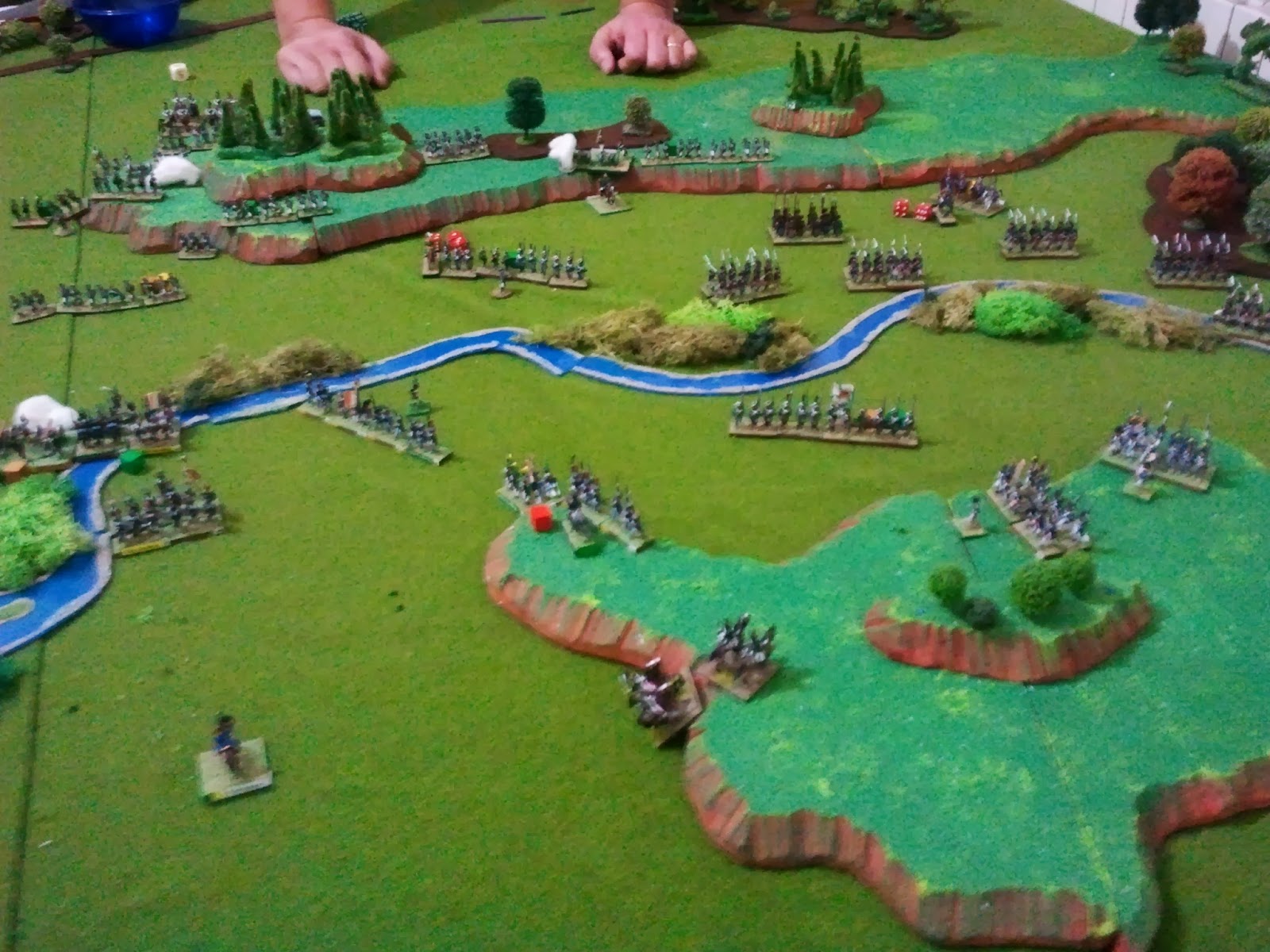 Towards the end of the battle, the situation on my side was compromised: I tried to retreat and form a second line with the remnants of my (Shaken) division. The Cavalry I received from the Reserve (bottom centre) was too little too late... 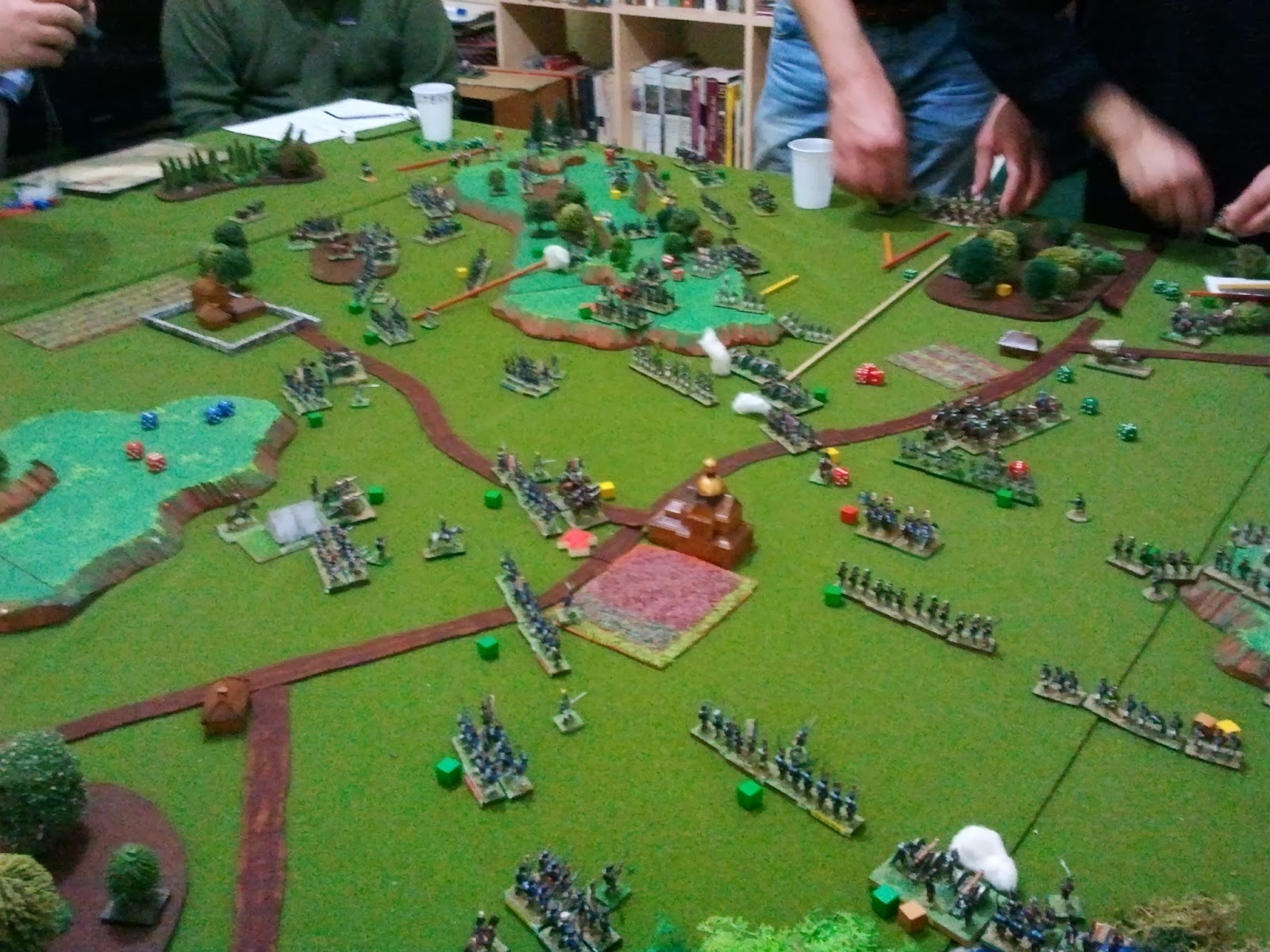 Our entire line is about to collapse: Diego's center division is broken, and Federico- notwithstanding a foothold on the hill he had to take - has no more resources to press on. His Division is also shaken. 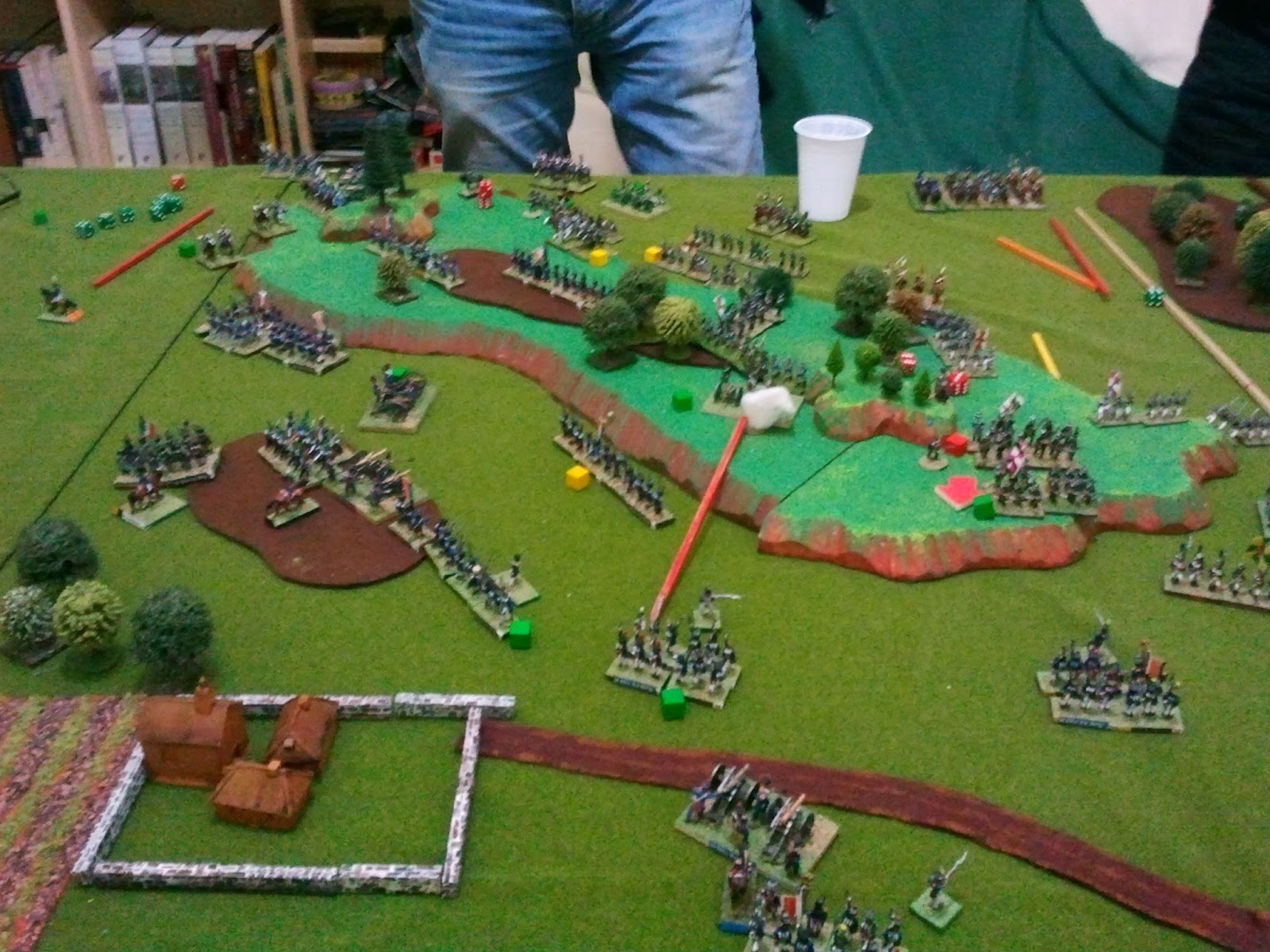 The final turn on our left: Federico gaines the crest of the hill with 2 battalions, but everywhere else the French Corps is in pieces. With a final score of 51-16 victory points the Russian side gains a smashing victory.
About 120 units (Infantry battalions, Cavalry regiments and Artillery batteries) took part in the battle, for a total of about 1200 figures. The multiplayer rules and Command system worked very well according to all the participants, and we had a clear result at the end.
A great day.