Always looking for innovative sets of rules, I bought Altar of Freedom (by Greg Wagman, published by Iron Ivan Games) and the scenario book All quiet on the Potomac, that contains all major battles of the Eastern front in the American Civil War. After trying the rules solo (which is not the best option considering the secret bidding procedure) last saturday I invited my friends Diego and Diego from Rome to give it a try.
I set up the Champion Hill scenario, explained the rules, and we finished it in 3 hours - just in time for lunch. 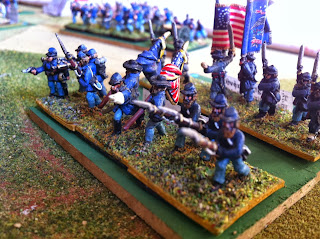 AoF is a game about commanding quite great bodies of troops (the basic unit is the brigade) that does not care about formations, and has very simple rules for movement and combat. As the author stresses in the designer notes, it is all about Command and the Generals' attributes (that DO change from battle to battle).
The heart of the system is the procedure for taking control of the clock (i.e. a sort of initiative that allows the player in control to set the pace of the battle) and I must say it works very well, as you have endless possibilities of trimming your bid for Priority points. The game has been designed for 6mm miniatures with the classic 6x3 cm. bases, but we played with my 15mm figures, based for Fire and Fury, on magnetic, 8x4 sabots. Above, you can see 2 US brigades "in column" and below the table after a couple of turns, with the Confederates defending the bridge on the Vicksburg road. 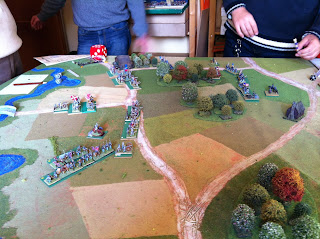 Knowing nothing about the rules, the US player was maybe too timid in his approach and surely I made a mistake adding Forney's brigade (an optional rule) to the rebel roster, because the Confederate won easily after the 8 turns of the scenario, avoiding the capture of the bridge by the US forces.
In AoF, small arms fire is quite ineffective if you want to break your enemies: close combat - and a wise use of supports - is what you need. You always (ALWAYS) need to have a reserve and this is something I like a lot, as players of my games know very well. Below, a Confederate Division deployed for an attack. 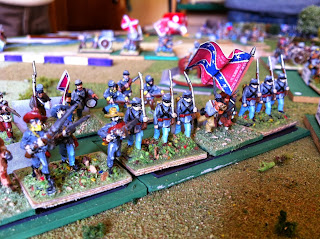 In all, a very good game in my opinion. NOT for those players who like the details of micromanagement, formations, wheels and "you can't do that", but great if you want to play all major battles of the ACW (the second scenario book will be available in 2014) in few hours, on a 120x180 table, and with a relatively small amount of figures.
Posted by Sergio at 12:35 PM